In this post, I will be going into details of how I successfully restored my dull yellow motorhome to its former glory without spending fortunes. This was a first for me and I learned as I went. I searched the Internet, especially Youtube but could not find anyone that has done it this way before.

Our motorhome was painted in yellow in 2008. We moved in and started touring. During this time, the bus had a few washes whenever it got dirty. Apart from that, nothing else was ever done to the paint. One day, when parked up, I noticed that the yellow looked a bit whitish in some places. On closer inspection, the paint was actually ridiculously dull in comparison with what it looked like originally.

I shouldn’t have said anything but I did. The reply was “He who has the vision gets the job”. And that my friends, is how a very big job was started. I contemplated having the bus repainted but wanted to see if it would be possible to save the paint and maybe squeeze another few years out of it.

I got some Rally wax (approx 25 years old I guess) and a rag and started polishing one small panel. After about an hour of really sweating it out, the panel started to look good. This proved to me that the paint was salvageable but it would take months of polishing and when done, I’d have arms that will make Arnold Schwarzenegger drool.

So I had to find an easier, faster way. Next, I bought an electric polisher. This helped a little but still not nearly enough to get rid of the white oxidized top layer. Then I did something I thought was actually going to ruin it. I had some 800 grit sandpaper tucked away in a crate somewhere. I got a piece out, took a bucket with water and started lightly sanding the paint. This proved to be way faster than the polishing but took a lot of concentration not to ruin it. I found the fresh 800 grit a bit harsh so off I went to the hardware store and got some 1200 and 2000.

The 2000 grit proved to be the answer. Although much slower progress than the 800 grit initially, it saved a lot of polishing afterwards to get that glossy shine back. Also, it was more forgiving than the 800 that would easily cut through too much paint causing transparent spots where the paint got too thin. After sanding the whole bus, panel by panel, it was time to start polishing. I took the electric polisher and tried out lots of different brands of polish. Mothers did a reasonable job.

I wanted to add a protective coating this time and did a lot of research. There are so many products, each with its own story making the choice very hard and complicated. I looked at Corrosion-X which seemed quite promising but came with a weighty price tag. I walked into a local store soon after and found a new product called NuFinish. I liked the bold guarantee on the box and decided to give it a try. I applied it with the polisher an was quite impressed with the ease of application. After applying it, I found one panel that needed a little more sanding due to a dull spot which was overseen.

I quickly grabbed some 2000 sandpaper and started wet-sanding it. To my surprise, the NuFinish was pretty tough to sand off to reach the paint underneath. This really impressed me.

The NuFinish manufacturer reckons that the polish contains NO wax and consists of some polymers that create a thin tough film over the paint. Therefore you need to only polish once a year. After the trial and error testing I did, I am confidant that they are not exaggerating.

It is 7 months since I did the first panel with NuFinish and it still repels water and looks like the day I applied it. This was a harsh 7 months with lots and lots of rain and severe UV from the sun. I am very impressed so far. To my surprise, I found the NuFinish on Amazon too:

The project is not fully completed yet. Due to all the rain, I had very little time to work outside lately. I did it in sections. Here you can see the crazy “before” and “after” dull and bright yellow as I was sanding away. 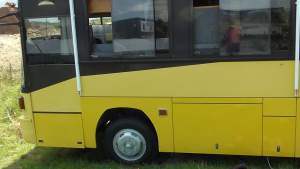 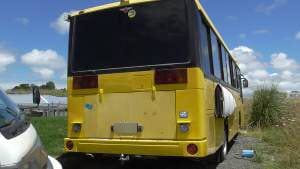 Below is a picture of the bus from 10 years ago:

The plan is to restore it to its original look. Not an easy task but well under way. The roof was done just before the new solar went on.Three of the wheels are done and I give details of the experiment and results in this post.

It will take some more polishing to get the same great shine although it is not far off. Some warmer dryer weather will help a lot. (It was 9 degrees Celsius inside this morning (04 Sept 2018). Luckily it warms up in a jiff with the diesel heater.

Following is a video I found on NuFinish with some more info:

It will be great to hear from anyone who may have used this NuFinish polish before. What results did you get? Just note your experience in the comments below.